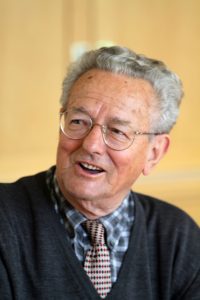 We regret to announce the death at 18.30 hrs on 26th February at Herberthaus, Brixen, Italy, aged of 90, of

Hans was born in Salvarosa, Treviso, Italy. His father, John, a railway man, was a widower with three children when he married to Creszentia Seeber who gave birth to Hans on 19th January 1929. In the course of time one more brother and one sister followed him. He did his elementary studies in Instituto Pio X in Castelfranco, the very same school where Joseph Sarto, who later became Pope Pius X, studied 90 years earlier. Following the death of his father in 1938, his mother moved to Aicha and Hans continued his schooling in Fanzensfeste. On 15th April 1941, he entered the St. Josefs Missionshaus in Brixen and attended classes in the Vinzentinum from September 1941 until June 1950 with an interruption of two years during the war. He attended Philosophy at the Major Seminary in Brixen and went to Mill Hill for Theology in September 1952. He took his Perpetual Oath on 6th May 1955 and was ordained priest in Mill Hill on 8th July 1956 by Bp. George Craven, Auxiliary of Westminster. He was appointed to the Philippines and arrived in Iloilo on 17th March 1957.

Hans spent 12 years of dedicated service in Panay Island. In Iloilo he served as curate in places like Igbaras, Sta. Teresita and Tanza while in Antique he was a curate in Bugasong and San Jose. Bp. de Wit made him Parish Priest of Valderama, Antique in 1965. In all these places, Hans made friends easily with the local people due to his cheerful ways and always with a smile on his face. In Valderama, he gave his full attention to the new High School and built a strong concrete building for it. Despite his weak lungs, he made regular long walks up the mountains in order to reach out to people in distant barrios. Following medical advice, he left the Philippines in 1968 for Brixen to seek medical help for his tuberculosis. Having made a good recovery, he was appointed to the German Speaking Region where he served the Society and the mission in various capacities as Vocation Organiser, Development Director, Regional Bursar and later Rector in Münster in 1977. From 1982 onwards, he was a delegate to three General Chapters and was entrusted important roles in the central leadership of the Society as Councillor for Finance (1982-1988), Councillor for the Home Regions and Vicar General (1988-1994). He was appointed Procurator General in Rome in 1994, a position he held for almost 9 years until his retirement in January 2003. Hans continued to do missionary works through parish supplies and mission appeals even in his retirement until he had to stop due to his frail health.

In September last year, he suffered from a fall that broke his rib. This was followed by another fall on 13th December 2018 when he was hospitalised. A blood clot on the brain was diagnosed that affected his memory and his speech. He never recovered from the fall, neither mentally nor physically. He was confined to bed and wheelchair in Herberthaus. He turned 90 years on 19th January this year. At 18:30 local time on 26th February 2019, Hans returned to his Creator and Saviour whom he had served faithfully for more than six decades as a missionary. “Well done, good and faithful servant! You have been faithful with a few things; I will put you in charge of many things. Come and share your master’s happiness!” (Matthew 25:21)

His remains will be buried on Friday, 1st March, at 2.30 pm in the nearby cemetery in Elvas, Brixen.

May he rest in peace!