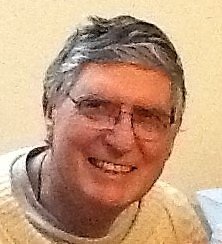 We regret to announce the death at 09.00 hrs this morning, Tuesday 28th February, in Broadgreen Hospital, Liverpool, aged 66 of

James (Jim) Dominic Fanning was born on 6th May 1950 to James and Josephine (neé O’Neill) Fanning in London. He was the eldest boy, the second of ten children. He obtained his secondary educated at St Ignatius College from 1961 – 66 and Freshfield from 1966 – 68. At Roosendaal from 1968 – 71 he studied Philosophy then entered St Joseph’s College Mill Hill in 1971 where he studied Theology. Having taken his Perpetual Oath in May 1973, Jim was ordained on 22nd June 1974 by Gerald Mahon MHM Auxiliary Bishop of Westminster in Sacred Heart Church Mill Hill. Jim was unique among members of the Society in that he came from Mill Hill, so this was his parish church.

One of the ‘stages’ in Jim’s missionary training was to what was then Zaire and he developed a love for the country and the people which was to stay with him his whole life. After ordination Jim’s first appointment was back to Basankusu in 1974 where he worked enthusiastically, especially, at the request of the bishop, with the youth. Sadly his physical health was undermined and in 1978 he was transferred to East Africa. Between 1978 and 2011 Jim served faithfully in Kisumu and Kakamega Dioceses in Kenya and Tororo in Uganda. Twelve years of this time was spent criss-crossing both countries doing Promotion and Animation for the Society. In 2011, 33 years after he last left it, Jim requested a transfer back to his first love, now known as the Democratic Republic of Congo.

In 2012 Jim headed back to DRC, to a remote parish called Waka. During the War of Independence which had taken place while Jim had been away many of the structures had been destroyed or damaged – church, teachers houses, presbytery and the schools. Jim threw himself into what was needed with his usual enthusiasm but, sadly, once again his health let him down and in 2013 he was withdrawn from the DRC to return to the British Region. After a well-earned sabbatical at St Anselm’s Jim launched into a new mission as an APF-Mill Hill Organiser in England. This new foray coincided with the celebration of his Ruby Jubilee as a missionary priest. Jim carried out his duties faithfully until his health deteriorated once again. Although he spent the last few months of his life in hospital, Jim’s death on Tuesday 28th February was totally unexpected. May he rest in peace.

His funeral arrangements have not been finalised yet but will be published as soon as they are available.