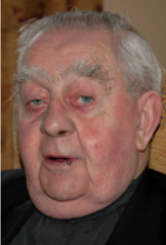 Matthew was born on 30th March 1926 in Blackrock, Co. Dublin, Ireland. His father, Edward, was married to Ann (née Cullen), and he had one brother and one sister. Following secondary education at our college in Freshford, Matthew studied philosophy in Roosendaal from 1946 to 1948. From 1948 to 1952 he studied theology at Mill Hill, London. He took the Perpetual Oath on 5th May 1951 and was ordained priest on 11th July 1952 at Mill Hill by Cardinal Griffin.

After ordination, Matthew took up an appointment to Kuching Diocese, Malaysia. In 1959 he moved back to Ireland and served in Freshford on the staff and was involved as Procurator and Bursar in the Organising work. From 1971, he took up parish ministry in Southampton, Diocese of Portsmouth. In December 1972, he became APF Organiser for the Diocese of Leeds. In 1975, he returned to Ireland to take up work for the Organising Department. Here he gained the reputation of being a good administrator and hard worker.  Matthew then followed a renewal course at Hawkstone Hall. From 1983 to 1989, as Rector of Herbert House in Dublin, Matthew cared for our retired members. In 1989, he served as assistant priest in Kensal Rise Parish, Archdiocese of Westminster. On completion of his stay there, the parish priest wrote that “he has done all things well”.  From 1994 onwards, Matthew was engaged in mission promotion from Kilkenny and was also Vice-Rector during that period. Matthew was appointed to retirement at St Joseph’s House, Dublin in August 2009.

In recent years, Matthew suffered from failing eyesight. On 19th June, following a serious fall, Matthew was admitted to St James’s Hospital, where his health deteriorated further. He died there in the early afternoon of 10th July. The reception of the body will take place at St Joseph’s House, Rathgar, and the Funeral Mass will be celebrated there the following day, followed by burial in the Mill Hill plot at Bohernabreena Cemetery. Precise dates and times have yet to be determined. May he rest in peace.