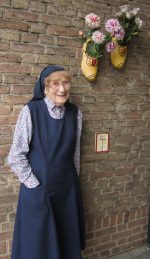 who died in Vrijland on Thurday 6thJuly 2017 aged 91 years

Ytje Bruinsma was born on 26thFebruary 1926 at Hennaarderadeel in the Netherlands and baptised the following day. She was the youngest of the five children of Gerben and Susanna Bruinsma. Ytje obtained a diploma in tailoring before she entered the Congregation as a postulant in September 1955. She became a novice on 29thJune 1956 in St Philomena’s Altrincham receiving the name Christina. It was here that she also made her First Profession on 6thJanuary 1958 and her Perpetual Profession on 1stMay 1963.

Between 1958 and 1990 Sister Christina worked in Mill Hill houses in Roosendaal, Vriyland, Tilburg and Brixen with a total of twenty two years in Vrijland and fourteen years in Brixen. She then spent fifteen years in Blackburn before retiring to Vrijland in December 2005.

Christina spent most of her life in hidden ministries of sewing, laundry work and other domestic duties content always not to be in the limelight and praying for those in more active missionary apostolates. Even in retirement she continued to sew and to look after the chapel flowers. She loved to paint and to look after her many pot plants and she fondly cared for the cats in Vrijland. Her quiet nature endeared her to many and she was greatly loved by her many nephews and nieces who often visited her. She was fiercely independent in caring for herself and could be be quite competitive in her card games. Above all she was a woman of deep simple faith and prayer.

Sister Christina died after a short illness on 6thJuly at 11pm. Her funeral Mass will take place in Vrijland on Thursday 13thJuly at 11.00am followed by burial in the cemetery there where she often walked to pray for the dead.