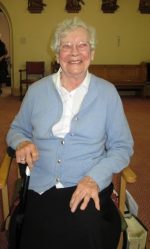 You prayers are requested for the repose of the soul of

Who died at the Franciscan Convent, Burnley

Josephine Thompson was born on 20th March 1931 in Malahide, Dublin and baptised the following day. She was the only daughter and second child of her parents Nicholas and Cecelia Thompson and is survived by her brother, William. Josephine was educated at the Presentation Convent school and was a tailoring apprentice at the time she applied to enter the Congregation.

Josephine was a postulant at the Convent of St Francis in Cork and entered the Novitiate at St.Philomena’s , Altrincham on 6th January 1953, receiving the name Sister Mary Fintan. She made her First Profession in Altrincham on 29th June 1954. Her early appointments were to St Finbarr’s College Farrenferris, St Peter’s, Freshfield, Didsbury and Burn Hall and she made her Perpetual Profession at St Philomena’s on 29th June 1959. She was then appointed without training as a nurse in Kanowit, Sarawak where she remained until late 1964. Her file states that she showed a definite aptitude for nursing and she was sent to train as a State Registered Nurse at Hope Hospital, Salford doing so well that she was sent for further training as a Registered Midwife in Drogheda, Ireland.

Sister Josephine returned to Kanowit in 1970 but the Sisters were withdrawn from Sarawak in 1971 and she was asked to return to Farrenferris College, Ireland as the Nurse. She subsequently spent three years in Broughton Hall caring for our sick sisters and then six years as local superior and nurse in Herbert House, Freshfield caring for the sick and retired Mill Hill Missionaries. It was a ministry she loved and she cared for many priests there until they died combining her practical nursing skills with compassionate and gentle care geared to each individual and a smile and a twinkle in her eye when her patients decided to do things their way rather than hers.

In 1984 Sister Josephine was appointed as local superior in Blackrock and she became assistant Regional the following year. In 1987 she returned as nurse to Broughton Hall and when the house was sold in 1993 she moved with the sick Sisters to Burnley. She later told many a tale about racing up the M6 motorway because she needed to avoid any Sister dying en route to Burnley. In 2000 she was appointed as Assistant superior to Sister Patricia Johnson in Blackrock and retired to Burnley in 2004. She adjusted well to the slower pace of life in Burnley, enjoying her Irish music and radio, reading and praying with the sick sisters.

Josephine had a lifelong love of nature and was never happier than when she was in the garden. Both in Broughton and later in Burnley she spent hours in the garden and tending indoor plants in the house and in the conservatory. She loved the view of the hills from her window and one day described it as receiving the hundredfold.

Josephine called in to visit the sick sisters every day until just before the General Chapter when she became very weak and gradually deteriorated over the next three weeks. She died quietly and peacefully in the early hours of Friday 30th June 2017. Her funeral Mass will take place at Franciscan Convent , Burnley on Tuesday 11th July at 10.30am followed by burial at Burnley Cemetery.