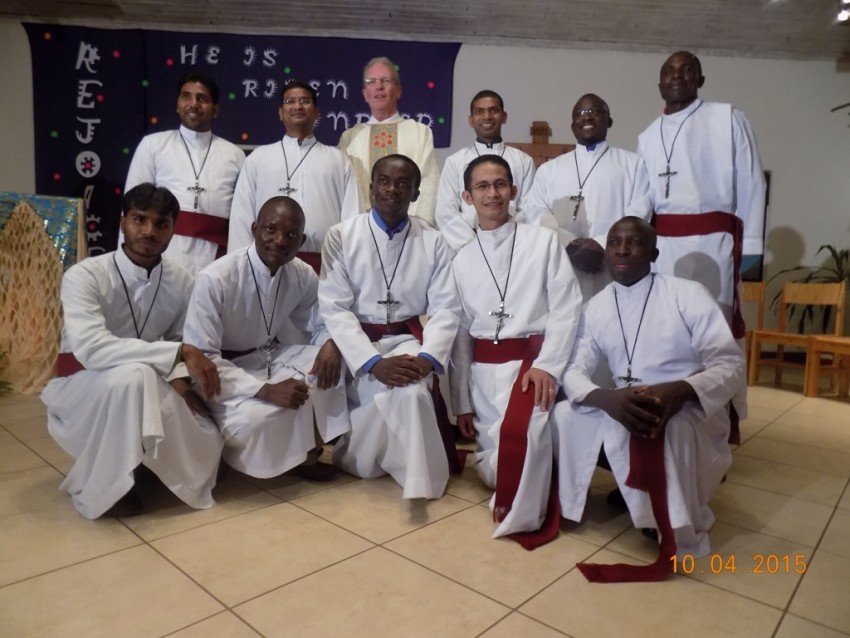 On 1 March 1866, Herbert Vaughan settled with one student at Holcombe House, Mill Hill, London.  There he intended to begin to fulfil the missionary obligations of the Catholic English-speaking world.  Britain had become heir to an empire.  Catholics must ensure that the true voice of the Gospel did not remain dumb throughout that empire.  It seemed indeed a foolhardy task.  The Church in England and Scotland had barely emerged from the background of the national life.  The Irish were strong in numbers, but poor.  Irish immigration would prove itself a boon to English and Scottish Catholicism.  In 1866, it was felt to be more of a burden than a benefit.  Vaughan approached the Cardinal of Westminster and suggested that he might establish an English missionary college.  Even he was surprised at the Cardinal’s reaction.  As a newly appointed bishop, Cardinal Wiseman had been tortured with doubts and uncertainties.  In his distress he sought the advice of Father Vincent Pallotti.  This venerable old priest advised him: “The Church in England will not flourish until it send priests to the foreign missions”.

Vaughan’s plan to establish a missionary college did not seem foolhardy to Cardinal Wiseman.  It seemed instead the answer to a prayer.   The Mill Hill Missionaries have always regarded their own progress as a measure of God’s blessing on the Church in England.  At the same time they have never regarded themselves as purely English, or even British.  Their founder had been educated in Belgium and had a profound regard for the Flemish. His journeys in Austria, previous to teaching at Ware, gave him a deep respect for the Austrians as well.  It was not surprising, therefore, that he sought recruits not only in England, Ireland, Scotland and North America, but also in Flanders, the Netherlands and Tyrol.

Despite the early difficulties, the number of students grew.  In 1869, Vaughan realised that Holcombe House would soon by far too small to accommodate them.  He decided, therefore, to begin the new, permanent college buildings.  On the feast of SS Peter and Paul, 29 June 1869, a quiet ceremony was performed by Archbishop Manning and the community.  The foundation stone of the college was laid.   By the end of February 1871, the college, though not complete, was ready to be occupied.  The community moved in on 28 February.  On Sunday, 19 March, the laying of the foundation stone of the church took place.  The first Mass was celebrated in the church on the feast of St. Francis Xavier, 3 December 1873.  The official opening was celebrated on the feast of St. Joseph, 1873.  The consecration of the church and its dedication as the national shrine to St. Joseph had to await the full clearance of all its debts.  This was achieved in March 1874.  On 31 March, therefore, the church was consecrated.  By special indult of Pope Pius IX, Cardinal Manning was permitted to crown the statue of St. Joseph.  This ceremony was performed in the presence of the hierarchy of England and Wales on 13 April 1874.