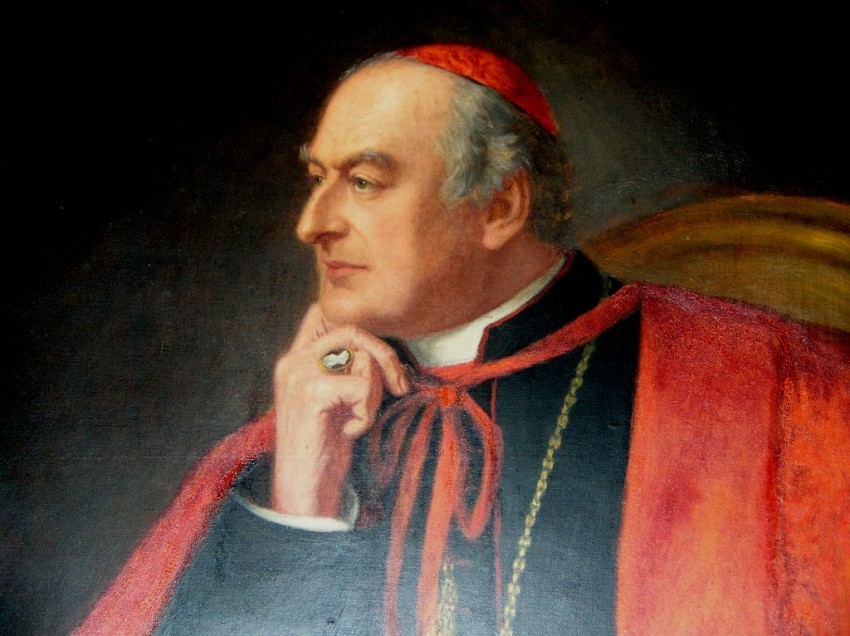 Herbert Vaughan was born in Gloucester on the 15th April 1832, the eldest son of Colonel John Vaughan and Eliza Vaughan, née Rolls. The Vaughans were a large landed family of English Roman Catholic recusant stock, whose estate was situated at Courtfield, near the English-Welsh border.  His parents instilled in their sons and daughters a deep love of God and neighbour, and a desire to be of service to those in need.

His mother, a Catholic convert from The Hendre, Monmouthshire, Wales, was intensely religious; it was her habit to spend an hour every day in prayer before the Blessed Sacrament, begging of God that He would call her children to serve Him in the choir or in the sanctuary.  Subsequently, all five of the Vaughan family’s daughters became nuns, while six of the eight sons became priests, three of them becoming bishops: Roger became the Roman Catholic Archbishop of Sydney, Australia in 1873, and John became the titular bishop of Sebastopolis and auxiliary bishop in Salford in 1909.

From an early age his thoughts had been turned to the priesthood. His mother, writing when he was only fourteen, said she was confident that he would be a priest. His father’s dearest wish was to see him win distinction as an English soldier, but when he was only sixteen he had made up his mind to give himself to the Church.   It was a decision his mother heard of as an answer to her prayers, and that his father accepted with good grace and considerable pain.

The vision of the priesthood that formed part of Herbert’s decision was specifically missionary, with a clear focus on the spiritual needs of Wales on the border of which he had been born and bred, and where a 17th century ancestor, Fr. Thomas Vaughan, had risked his life in ministering to the people.  Herbert’s wish to devote himself to the study of Welsh failed to win the support of Bishop Joseph Brown OSB, the Vicar Apostolic of the Welsh District and former Prior of Downside, and in 1850 he was sent to the school at Downside where he lived for a year within the Benedictine monastic community, wearing clerical attire and studying theology.

In the autumn of 1851, in the high spirits of a nineteen years old, Herbert left for Rome to enroll as a student at the Collegio Romano, the forerunner of the Gregorian University, and there for a time he shared lodgings with the poet, Aubrey de Vere.  The following year he took up residence in the nearby Pontificia Accademia dei Nobili Ecclesiastici.

In Rome, Herbert established what was to be long if sometimes shaky friendship with Henry Edward Manning, who had been received into the Church in 1851 and who would become the second Cardinal Archbishop of Westminster following the Restoration of the Catholic Hierarchy in 1850.  Life as a student in Rome was largely an experience of mental fatigue, made all the worse by indifferent health and self-reproach. In the intimate diary which he kept at this time he constantly reproaches himself for his excessive impetuosity in speech and action.

Herbert’s mother died in 1853 when Herbert was just twenty-one.  It has a devastating effect on all the family and he returned home to be with his father.  However, he returned to Rome to continue his studies and was ordained on 28 October 1854, at Lucca in Tuscany by the Archbishop Giulio Arrigoni, at the age of twenty-two. He said his first Mass in Florence at the Church of the Annunziata on the following day. His generally fragile health had led teachers and colleagues to press the Holy See for the ordination should he not reach canonical age for the priesthood.