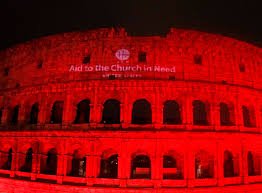 Aid to the Church in Need (ACN)’s #RedWednesday event yesterday (25th November) featured testimonies from those living day by day with persecution, including kidnapped teenager Maira Shahbaz and Nigeria’s Archbishop Kaigama, who had one of his priests kidnapped earlier this week.

Maira Shahbaz, a 14-year-old Christian girl from Pakistan, described how she had been abducted, forcibly converted and made to marry against her will, as well as being “blackmailed, tortured and badly abused”.

Having escaped from her captor, she is now living in hiding.

She said: “The lives of me and my family are at risk in Pakistan. We are constantly receiving death threats. We are extremely scared and concerned about our security.”

He highlighted the cases of Leah Sharibu – who is still being held by militant group Boko Haram – and kidnapped seminarian Michael Nnadi, who was killed by his abductors.

The archbishop also mentioned other threats, starkly warning that: “The Christian-dominated Middle Belt and some parts of northern Nigeria will have no future if groups like Boko Haram and allied terrorist groups continue to harass them.”