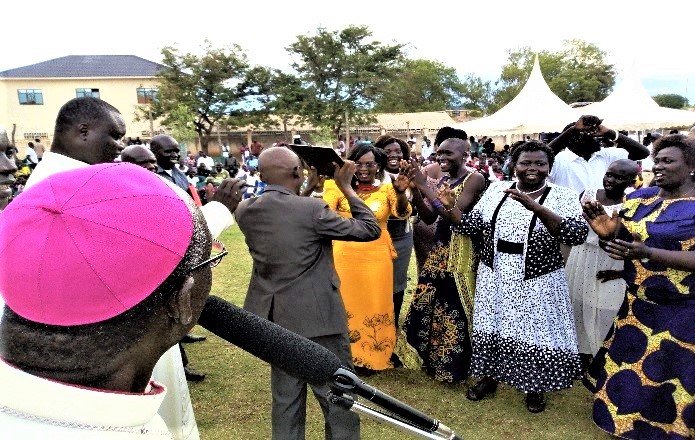 “I am here on behalf of the Holy See, being delegated by the Congregation of the Evangelization of Peoples, acting under the mandate of the Holy Father, to facilitate the preparation and to supervise the installation of His Grace Most Rev. Stephen Ameyu Martin
Mulla as the new Archbishop of Juba,” Msgr. Visvaldas Kulbokas has said in a statement released today, Friday March 6 2020.

This comes four months after some members of the Church in South Sudan wrote to the Vatican against the appointment of archbishop-elect, arguing that he is not a suitable candidate for the office.

“As you know, this appointment by the Holy Father Francis was made and announced on 12 December 2019, which was then followed by an investigative process concerning some allegations that had been presented by some individuals,” reads part of the statement by Msgr. Kulbokas.

“I am pleased now to announce to you that after evaluating diligently that entire situation, Pope Francis has confirmed Most. Rev. Stephen Ameyu Martin Mulla as the new Archbishop of Juba,” Msgr. Kulbokas stated.

Msgr. Visvaldas Kulbokas further disclosed that the installation of the archbishop-elect is already scheduled this month saying, “Now, the date fixed for the installation of Most. Rev. Stephen Ameyu Martin Mulla is Sunday the 22 of March 2020 at 10.00 a.m. in St. Teresa’s
Cathedral, Kator. He added that a committee overseeing the preparations towards
Archbishop Ameyu’s installation is already formed.

“I have formed a committee, consisting of some parish priests, as well as some priests of the Archdiocese of Juba, who are holding administrative positions in this local Church. This committee will be headed by the Episcopal Vicar for the Clergy and Religious in the
Archdiocese of Juba, Rev. Fr. Nicholas Kiri,” he explained. 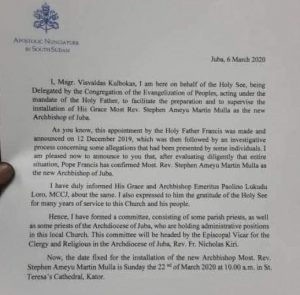