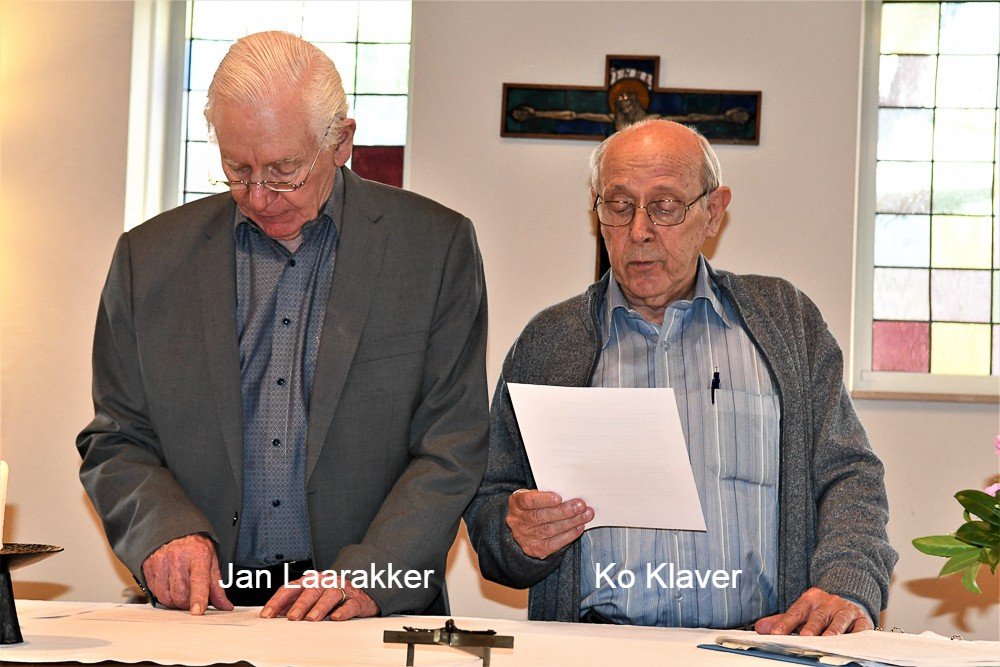 The customary celebration of the Feast day of St Joseph, Patron Saint of the Mill Hill Missionaries, on March 19th at St Josefhuis, Oosterbeek, this year was given an additional sparkle by the renewal of contract of two senior residents.  Jan Laarakker (*1929) and Nicolas (Ko) Klaver (*1944), two long-standing Mill Hill Missionary Associates, renewed their commitment for another period of five years in the privacy of the resident community – COVID-19 regulations obliging.

In his homily during the Eucharistic celebration, Wim van Gastel mhm, aptly described them as two Joseph-like figures, quietly going about their manifold tasks, with an impressive missionary CV, now set to renew their commitment notwithstanding their advancing seniority.

After a career in education with a particular interest in art and music and following the death of his wife Adèle, Jan Laarakker mhm ‘discovered’ Africa and the Mill Hill Missionaries. He applied to become a lay missionary associate in the mid-1990’s and joined the missionary team led by Hans Burgman mhm in the well-known Pandipieri/Kisumu Urban Apostolate Programme in Kisumu, Kenya. The slum-based Art School at Nyalenda became his favourite haunt. He later moved to Masindi, Uganda, to offer his services to help child soldiers from Sudan reintegrate into regular life through education. After a stint in Courtfield he eventually retired to St Jozefhuis where his gentle grandfatherly presence makes him a much loved community member.

In view of the overall age profile at St Jozefhuis Ko Klaver is considered a ‘youngster’ (*1944). He started his trajectory with the Mill Hill Missionaries as a ‘Contract Member’ (initial appellation of associated lay missionaries) in 1972. A building contractor by profession Ko spent 47 years in Uganda and Kenya working as a lay missionary in a multiplicity of capacities – construction and planning, teacher, bursar, rector of houses.  The turbulent years during president Idi Amin’s reign of terror in Uganda no doubt were the most dramatic and imperiled of his impressive missionary career. Currently recovering from a hip replacement he will undoubtedly add a few more tasks to his CV in the years to come.

Today’s event was planned to be part of a much larger celebratory trajectory involving the festive commemoration of the 50th anniversary of the start of the Association Programme of the Mill Hill Missionaries on Saturday 21st March. But the latter celebration has had to be cancelled due to the coronavirus emergency.

The thought that St Joseph, our Patron Saint, was no stranger to emergencies, may provide some solace.