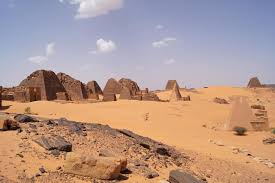 While Egypt has long been explained in light of its connections to the Near East and the Mediterranean, Kush makes clear the role that black Africans played in an interconnected ancient world. Kush was “at the root of black African civilizations, and for a long time scholars and the general public berated its achievements,” Geoff Emberling told me. Edmund Barry Gaither, an American educator and director of Boston’s Museum of the National Center of Afro-American Artists, says that “Nubia gave black people their own place at the table, even if it did not banish racist detractors.” The French archaeologist Claude Rilly put it to me this way: “Just as Europeans look at ancient Greece symbolically as their father or mother, Africans can look at Kush as their great ancestor.”

Today, many do. In Sudan, where 30 years of authoritarian rule ended in 2019 after months of popular protests, a new generation is looking to their history to find national pride. Among the most popular chants by protesters were those invoking Kushite rulers of millennia past: “My grandfather is Tirhaka! My grandmother is a Kandake!”

Intisar Soghayroun, an archaeologist and a member of Sudan’s transitional government, says that rediscovering the country’s ancient roots helped fuel the calls for change. “The people were frustrated with the present, so they started looking into their past,” she told me. “That was the moment of revolution.”