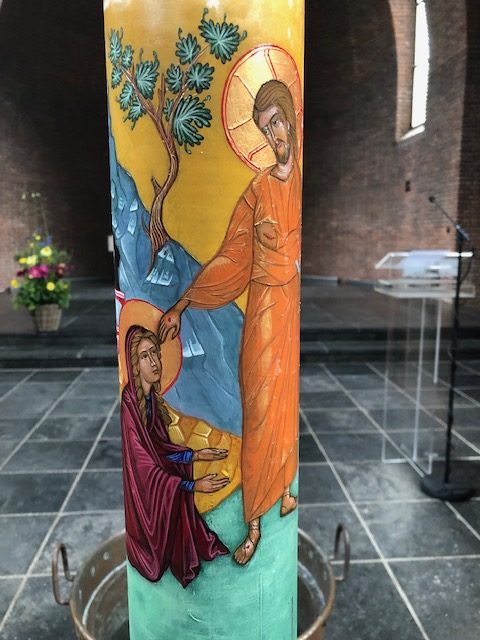 There is another, more costly type of grace that comes with interruption: it forces us to look at things we would often rather not look at, to allow our gaze to linger on what lurks in the shadows. I like the phrase: ‘what the eyes does not see, the heart cannot grieve over’. There is so much we do not see. There is so much we do not even want to see… Covid has given us a little push.

Inequality: Probably the starkest shadow that has been cast is that of inequality. In lockdown it makes quite a difference if you have a large house and a garden. If you have decent food and a pharmacy close by. If you are part of a strong community where people take care of each other. How on earth do you home-school your children if they can’t access a computer or decent Wi-Fi? Or if you yourself cannot read – or speak English?

Race: In the middle of a pandemic, attention suddenly turned to slavery and its legacy in America and Britain, an issue which most of us probably assumed had been dealt with long ago. Race became an issue with the death of George Floyd and the realisation that ethnic minorities were more vulnerable to Covid-19 than the white population. But there’s a third factor too: the advance over the last decade of the far right, which has had a toxic effect on many minority groups. Whatever you think about the politics of statues, the eruption of protest was an expression of something that can no longer be ignored. An awful lot of people are hurting because of the message they have been given about not belonging.

Older people: A notable shadow has been the plight of our elderly population, especially those in care homes. Our treatment of the elderly is a long-standing scandal. We all know that caring for grandparents with dementia takes a huge amount of time and energy and in a frenetic, hyper-active society like ours, it’s a burden too far for most working people. So, we consign our loved ones to care homes. Covid brought them back to a kind of visibility because the death- rate in homes was sky-high. But who is going to keep them in the limelight? And how are we to care for them decently?

Migrants: There are other dark corners that we are even less keen to look into. We have heard about destitute asylum seekers. I’d like to hear more, too, about how poor migrant workers have fared, people who live in the outskirts of our cities in crowded accommodation and are paid a pittance. I’d like to know more about the plight of trafficked people. The outbreaks of Covid infections in meat factories and abattoirs ought to draw our attention to places we don’t even want to think about, where poor labourers undertake work which would make our stomachs churn, and in conditions that match a mechanised hell. All these groups have been totally absent from media coverage – and that is hardly surprising.