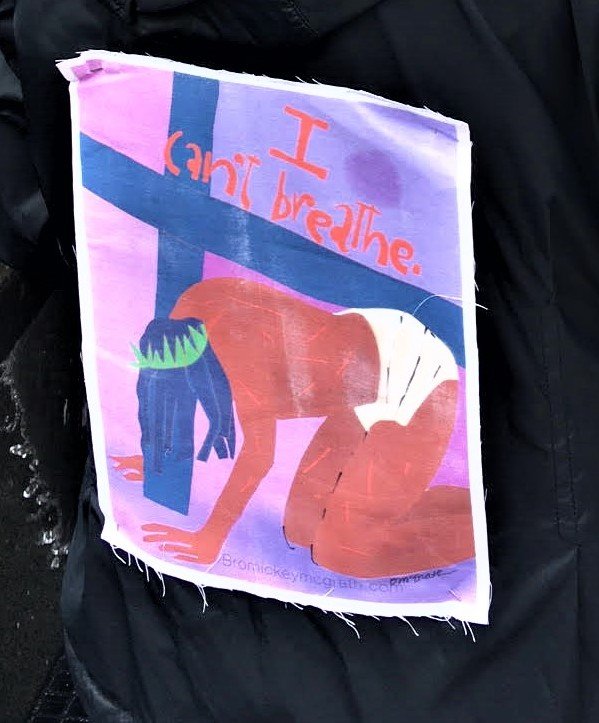 Taking the Knee for the Disinherited

You must also study and learn the lessons of history because humanity has been involved in this soul-wrenching, existential struggle for a very long time. People on every continent have stood in your shoes, though decades and centuries before you. The truth does not change, and that is why the answers worked out long ago can help you find solutions to the challenges of our time…I urge you to answer the highest calling of your heart and stand up for what you truly believe. (Civil rights leader and congressman, John Lewis shortly before his death on July 17, 2020)

The above illustration is by artist and social critic Eric Drooker for the cover of The Nation in October 2017. It is titled “Taking the Knee”. “Needless to say, we live in a willfully unconscious culture, and we’re world famous for our historic amnesia.”  He hoped to visually shake the viewer out of that amnesia with his image of an athlete taking the knee with fist raised. (The Washington Post, Michael Cavna, 9/29/ 2017.)

The athlete was football player Colin Kaepernick. In 2016 with two teammates he began kneeling, in ”a simple silent gesture,” during the National Anthem at football games to protest against racial injustice in the United States.  One reporter wrote that “outside of politics there may be nobody in popular culture at this complex moment so divisive and so galvanizing, so scorned and so appreciated.”  (New York Times, John Branch, Sept 7, 2017).

The raised fist in the illustration was not part of Kaepernick’s protest. It refers to other athletes at the Mexico City Olympics in 1968. At the 200 meters award ceremony for Gold Medal winner Tommy Smith and Bronze Medal winner John Carlos, both representing the USA, the sprinters raised gloved Black Power fists to represent their solidarity and support for Black people and the oppressed around the world.

The Silver Medalist, Peter Norman, an Australian teacher, inspired by his Salvation Army roots, was sympathetic because of his opposition to racism and the White Australia policy in his own country. With the two Americans he wore the badge of the Olympic Project for Human Rights. The OPHR was founded in 1967 by Dr. Harry Edwards, a civil rights activist, to protest racial segregation throughout the world.

Norman was punished when he returned to Australia and not allowed to compete again. At his funeral in 2006, Smith and Carlos were pall bearers.

Many years later Colin Kaepernick had an awakening to the injustices Smith, Carlos, and Norman, protested against in Mexico City. A child adopted by white parents in Wisconsin he began to read. He read to inform himself not only about racial and social inequality in the Unites States but around the world. He was looking for “a deeper connection to his own roots and a broader understanding of the lives of others”. One of his first books he read was The Wretched of the Earth by Frantz Fanon about the French in Algeria; a study of the dehumanizing effects of colonialism. By the time he attended classes at the University of California at Berkeley, Kaepernick was “aware, focused and well-read and ready to learn.” Now he no longer plays football but tries to support and inspire others. One project is a book list for “for curious people interested in justice and equality.” Books are discussed that inspired Kaepernick. On March 25, 2018, the book suggested was Fanon’s The Wretched of the Earth.

A friend admitted recently that he had hardly read a book from cover to cover as an undergraduate. Looking back, embarrassed, he realized how ignorant and immature he had been. During his adult life he came to enjoy and value reading, and like John Lewis, sought to “learn the lessons of history.”

Adam Hochchild’s Bury the Chains is about the first grassroots human rights campaign which freed hundreds of thousands of slaves in the British Empire around the world. “If there is a single moment at which the anti-slavery movement became inevitable, it was the day in June 1785 when Thomas Clarkson, a Divinity student, sat down by the side of the road at Wades Mill in Hertfordshire and thought about his essay that had just won the Latin prize at Cambridge. It was on the slave trade. His research affected him so much that he thought if his sources were true ‘some person should see these calamities to their end.”

Solitary: Unbroken by four decades in solitary confinement: My story of transformation and hope, by Albert Woodfox.

“It was as if a light went on inside me that I hadn’t known existed.” At Angola prison in Louisiana, built on the site of slave planation, Woodfox came to understand the “institutionalized racism of the criminal justice system: It was purposeful and deliberate…and it wasn’t just blacks who were marginalized. It was poor people all over the world.” A hero of Albert Woodfox’s story is a senior federal judge; Judge James J Brady.

The Warmth of other Suns by Isabel Wilkerson takes its title from a poem by Richard Wright who moved from the South to Chicago in the 1920s. He wrote Black Boy in 1945: I was leaving the South to fling myself into the unknown…to transplant in alien soil, to see if it could grow differently,  if it could…respond to the warmth of other suns and, perhaps, to bloom.

From 1915 to 1970 almost six million Black people took part in a great unrecognized migration from the South to Northern and Western cities in search of a better life. Wilkerson tells the story through the experiences of some of them. She gives the biographies of three migrants; a sharecropper’s wife, an agricultural worker and a doctor. In her research she interviewed more than one thousand people.

Race is in The Skin and Caste is in the Bones:

Isabel Wilkerson has written another book released on August 4, 2020; Caste: The Origins of Our Discontent. This is an important book about which there will be much discussion.  Wilkerson began her research to discover “what are the origins and workings of the hierarchy that intrudes upon the daily life and chances of every American? That had intruded upon my own life with disturbing regularity and consequences.”

Her book examines what she defines as the unspoken caste system that has shaped America and how our lives today are still defined by a hierarchy of human divisions “The hierarchy of caste,” she writes, “is not about feelings or morality. It is about power—which groups have it and which do not. It is about resources—which caste is seen as worthy of them and which are not, who gets to acquire and control them and who does not. It is about respect, authority, and assumptions of competence—who is accorded these and who is not.”

Bhimrao Ambedkar a foremost leader of the lowest caste in India studied at Columbia University in New York. His graduate work in economics focused on the differences between race, class and caste. He returned to India and rejected the word “Untouchables” and spoke of his people as “Dalits”, meaning “broken people” which due to the caste system they were. In 1946 Ambedkar reached out to the Black intellectual W E B DuBois recognizing that the Blacks of the United States and the Dalits of India had a common fate. It was DuBois who channeled the cry of both peoples when he called out: “Why did God make me an outcast and a stranger in mine own house?”

Here is what Wilkerson writes of Albert Einstein:  Einstein, the physicist and Nobel Laureate, escaped Nazi Germany a month before Hitler became chancellor. “In America, Einstein was astonished to discover that he had landed in yet another caste system, one with a different scapegoat class and different methods, but with embedded hatreds that were not so unlike the one he had just fled.” “The worst disease is the treatment of the Negro,” he wrote in 1946. “Everyone who freshly learns of this state of affairs at a mature age feels not only the injustice, but the scorn of the principle of the Fathers who founded the United States that ‘all men are created equal’,” He could hardly believe that “a reasonable man can cling so tenaciously to such prejudice,” he said.