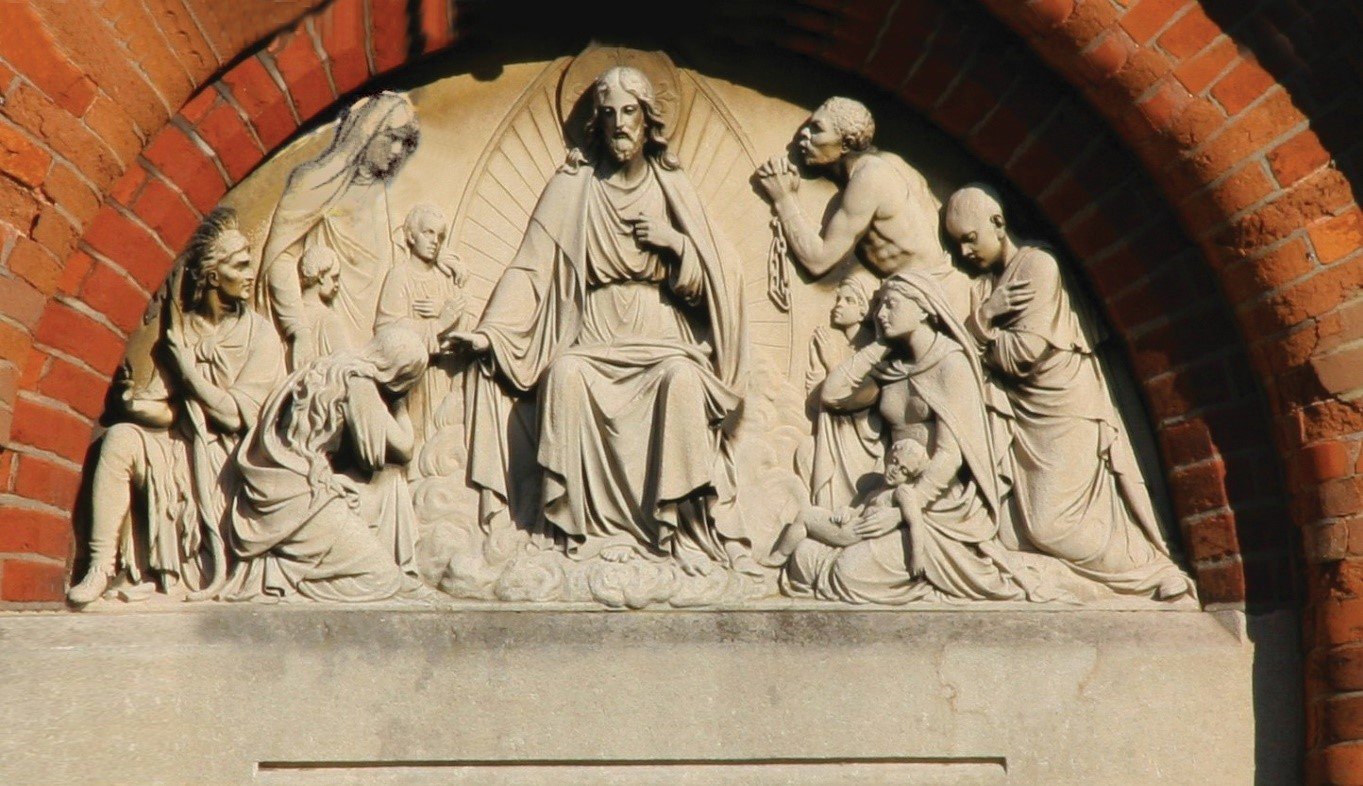 A recent message from the Cameroon mission recalls the ordination of Fr Elvis Berka in Kumbo fourteen years ago. Fr Elvis wrote that there will soon be twenty-six ordained Cameroonian members of the Mill Hill Missionaries. Therefore in Cameroon and throughout the Mill Hill community there are a growing number of members who might like to hear what John Lewis said about studying and learning the lessons of history. It is the task of a lifetime.

It also means that there is a new generation who never walked up to the main entrance of St.Joseph’s College, Mill Hill, and saw the relief above the doorway. There may also be members who are unaware of our founder’s travels to the American South and the promises of the first missionaries from Mill Hill to work exclusively for the Black population of the United States shortly after the Civil War.

The image used to close this essay was above the main entrance to the cloister of Herbert Vaughan’s St Joseph College at Mill Hill in London. It was installed soon after the completion of the college chapel. The cornerstone of the chapel was laid on March 19, 1871.The relief was the work of James Forsyth RA, and shows a seated Jesus with figures representing the oppressed of the world in the late 19th century. The scene was inspired by the Dutch-French artist, Ary Scheffer, in his painting titled “Christus Consolator” of 1851. Luke 4:18: I have come to comfort those who are broken hearted and announce to prisoners their deliverance; to liberate those who are crushed by their chains.

Clearly to the left of the seated Jesus is a figure of a Black person praying for help, the chains of slavery hanging from his wrists. For over one hundred and thirty years hundreds of missionaries passed beneath those figures. They are important signs of what was in the mind and heart of our founder, and first general superior, when he started Mill Hill. For him they illustrated a purpose. Just as the knelling Black athlete that began this essay it was a reminder of something much greater than what we see.

Vaughan studied in Rome as a young man. But beyond the academics he read and travelled and learned from others throughout his life. He was a keen observer who drew on the experiences of many to try to realize his dreams. And he was courageous, especially when he travelled to the Americas in 1863 to raise funds for his missionary college.

Answering a call to serve the Black population of the United States after the Civil War he arrived with four new missionary priests in Baltimore in December 1871. The new missionaries had made a special public promise at Mill Hill before they left:

Vaughan remained in the United States until June 1872 studying the country and looking for future stations for his missionaries. He returned again in January 1875 for the first General Chapter in Baltimore.

“In his notebooks Vaughan recorded visits to Savannah, Vicksburg, St Louis, Natchez, Memphis, Charlestown, New Orleans and Mobile, among other places. What he saw of the treatment by white Catholics of African-Americans shocked him. He wrote to Elizabeth Herbert that “the dislike of Americans” for “the negroes…far exceeds in intensity anything I had expected.”…His notes are a product of his enquiring mind applied to the material and spiritual condition of the African-American population in each of the places he visited.” (Cardinal Vaughan, 191)

The Josephites had their roots in that first group of men with Herbert Vaughan in 1871. In September 1993 their society celebrated one hundred years of service to the Black community. Over those years 483 Josephites had been part of that mission. Their contribution was remembered at the National Shrine in Washington by busloads of Black Catholics from all over the United States.

Herbert Vaughan placed the relief over the doorway of St Joseph’s College, Mill Hill, because it represented how he viewed the world and how he hoped the missionaries trained at Mill Hill might follow Jesus. They would try to care for the “Disinherited’ of Howard Thurman and the “Wretched” of Frantz Fanon, and those on the bottom rung of the human hierarchy of Isabel Wilkerson, in the name of Jesus.

Vaughan’s example of courage, inspiration and leadership, might also remind us to read and be inquisitive about the past, recognizing that we cannot impose our understanding on the confusion of their age. And like Fr Vaughan did as a young man to “answer the highest calling of your heart and stand up for what you truly believe.”