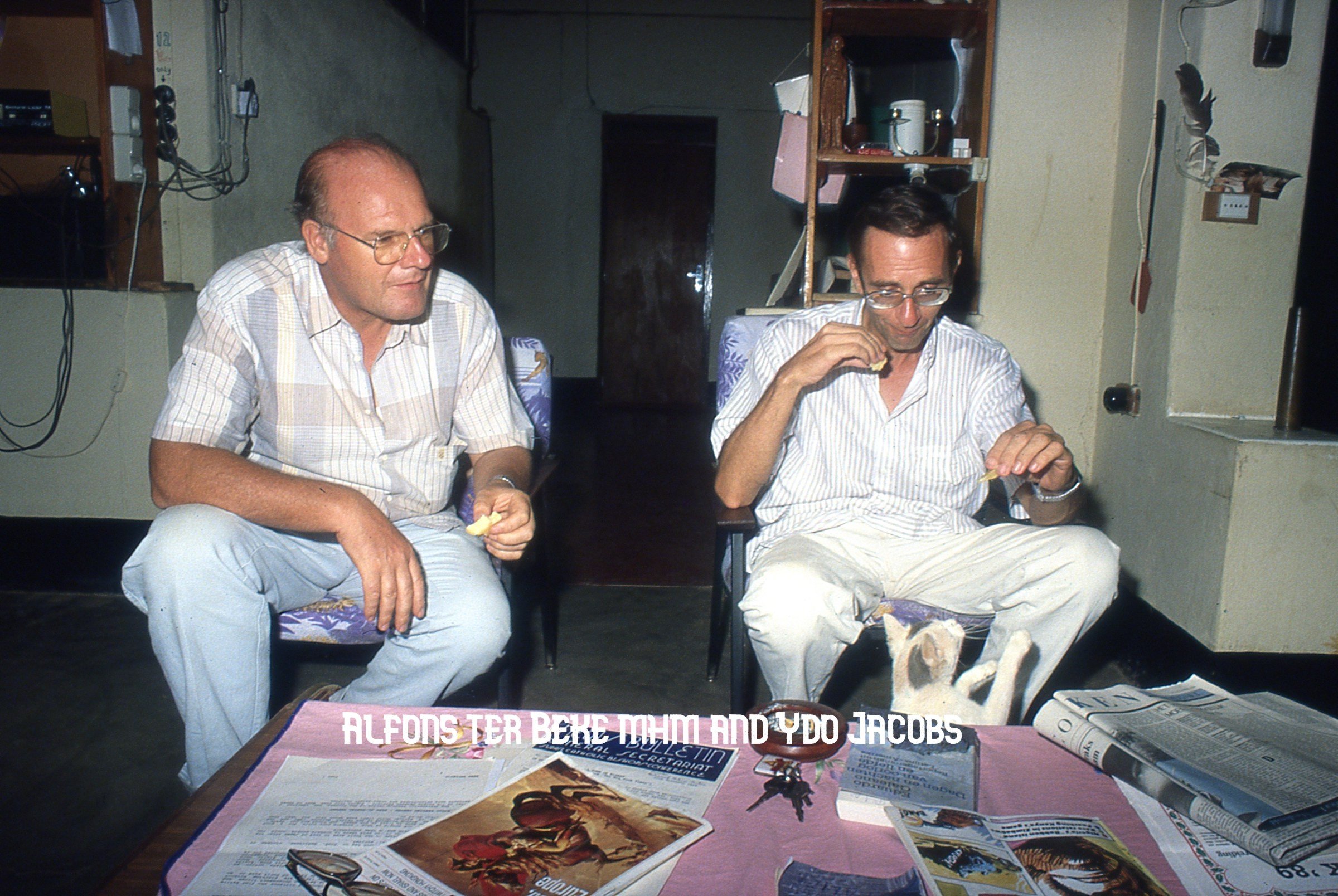 “Those rats play catch on my stomach.”

Journalist Paul de Schipper traveled to Africa for the first time in 1985, ended up in the ‘heart of darkness’ and met a toiling ‘light bulb’: Alfons ter Beke mhm, missionary in Sudan from 1983 to 1998, now retired in Vrijland, The Netherlands . Sitting in a wheelchair. Apparently absent, yet poignantly present: with a smile.  Because still perstistenly socially involved.

“Want to go to South Sudan. Something about refugees? ”, my editor in chief asks in the spring of 1985 . I say ‘yes’, look up the country in the evening in the worldatlas. It will be a rough Africa-baptism. And the start of a warm friendship. With undying gratitude to Mill Hill missionary Alfons ter Beke who , deep in a war zone, took the awkward initiate by the arm.

Alfons ter Beke, Mill Hill missionary in a corner of the planet where the good Lord seems to have taken a very long leave and forgotten to tidy up his world.

“Paul,” Alfons confessed, “Occasionally I’m at a loss. I have money to build a school, but the children are hungry. Food or education. I just buy food, otherwise there will soon be empty classrooms. ”

South Sudan, cruelly beautiful. Tormented and yet full of the indomitable joy of living.

The way there. A Cessna plane, skipping and dancing through air pockets. Groups of round thatched roofs, huts surrounded by a ring of protective thorn bushes. South Sudan where people are not called vanDyke because they live by the sea, but Cow or Son of the Cow, because that is their life: the cow. Where women make needles from sharp pieces of bone and men store their tobacco in the dried-out scrotum of a bull. South Sudan, the backyard of civilization, or the very beginning.

Below the brown, glittering ribbon of the eternal Nile serves as SatNav. The river that once carried Moses in his wicker basket. A literally heavenly view. Sitting next to the pilot, a thermos flask of tea and a pack of biscuits between the legs. The pilot gestures down after a few hours, makes a drinking gesture. Not for tea, for a refueling stop. A landing strip with a thatched roof. Someone comes along rolling a barrel of fuel. A hand pump does the rest. The pilot checks some bolts and nuts with a wrench. Next stop: the South Sudanese capital Juba.

A seedy hotel that served as a base for big game hunters in colonial times. Geckos on the wall, a stream of brown water from the tap. In the morning, at breakfast, the legs of the table in a saucer of water. The most convenient way to keep the ants out of the jam jar. At the reception a telephone operator in a beautiful dress. Whether the telephone works ? “Not for three weeks, maalesh …”- “That’s just the way it is!”

I will often hear that expression. I visit a camp with Ugandan refugees, driven away by yet another dictator. Staying overnight on the way to a Dutch happy-clappy Protestant missionary family with tiles on the wall : ” Speak boldly about God, but do not abuse His Name.”

Welcome to the Sudanese bush.

Welcoming, Christian inn? “Oh, and your black driver, no not in your room. He will find a place to sleep somewhere … ”

Well, God’s apostles come in all shapes and sizes.

Back in Juba, a besieged city. A Sunday walk along the Nile. A burning sun that puts your mind in slow motion. Forty degrees in the shade. Scorching plain. In the distance hills, leaning on their own bluish-gray shades. Between the reed beds the mythical river, halfway on its 6,000 kilometers journey to Egypt.

I meet a man with a bicycle, a Bible on the luggage rack, a woman behind it, walking. In that order. “Oh, you are from the Netherlands, there is another Dutchman here, a Father. . Come, I’ll bring you … ”

We walk through the dusty, scorching city. Until melodic singing comes wafting our way out of the silence. The source: a shady courtyard. Coolness brings back the sense of wonder. I see dancing, dark bodies, white bras, foam cups bobbing on a wavy sea. In between, seated, a balding, white man .

This is how I get to know Alfons ter Beke.

The start of a long, intensive friendship. With him. And with the club he appears to be a member of: the Mill Hill Missionary congregation. “Come and stay here,” Alfons invites me as he hears about the brown water and air-bubbling tap in my hotel”.

I move. And marvel at Alfons’ shower, one half of a drum split though the middle, filled with water perched on top of a bathroom wall with a showerhead attached. That’s all you need.

Alfons has electricity for two hours a day, generated by a roaring diesel engine every evening from about 6 o’clock. His request: when using the fridge, close the door quickly: “Because these two hours of cooling must last us till the next day.”

That evening on the way to the shower a rat rummages before my feet . “Oh well,” Alfons laughs, “they sometimes play catch on my stomach at night. I just knock them off. Good night. ”