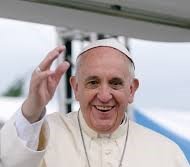 Francis, speaking about the ongoing crisis in Afghanistan, said: “I was touched by something that Chancellor [Angela] Merkel, who is one of the great figures of world politics, said in Moscow. I hope the wording is correct, but she said: ‘It is necessary to put an end to the irresponsible policy of intervening from outside and building democracy in other countries, ignoring the traditions of the peoples.’”

(The quote was actually from Russian President Vladimir Putin.)

“I believe that as a pastor I must call Christians to a special prayer at this time,” he said. “It is true that we live in a world of wars, (think of Yemen, for example). But this is something very special, it has another meaning. And I am going to try to ask for what the Church always asks for in times of great difficulty and crisis: More prayer and fasting.”