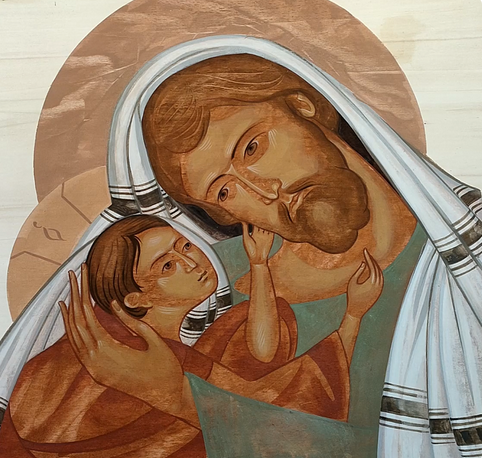 What’s in a name? Do people with the same name sometimes have much in common? We can look at two famous men in the Bible, both named Joseph, and see their similarities.

First, both of them had a father named Jacob. Remember the biblical references to the great patriarchs Abraham, Isaac and Jacob? Jacob’s son was Joseph. Matthew’s gospel, which traces the family tree of Jesus, says that Jacob was the father of Joseph, the husband of Mary of whom Christ was bom.

The second parallel is that both of them were royalty. The first Joseph was a patriarch, following the great line of Abraham, Isaac and Jacob. He was the last and perhaps the greatest of the Old Testament patriarchs. St. Joseph also was royalty since he was a descendant of King David. Some Scripture scholars speculate that if Rome had not occupied Palestine at the time, and if the Davidic line was still intact, St. Joseph would have been eligible for the throne.

The third parallel between the first Joseph and St. Joseph is that both of them suffered and put up with the difficulties of their daily life without complaint. The first Joseph was minding his own business going out into the fields to see his brothers, and they plotted to kill him. They seized him, stripped him and threw him into a well. Then, when they saw a caravan of gypsies going to Egypt, they sold him into slavery. Joseph could have said, “Lord, here I am; a good man. Why are you allowing this suffering in my life?” Isn’t that what we say at times? When we have difficult times in our life, we often ask “God, why me? What have I done wrong?” But, sometimes God allows us to go through suffering and pain for a greater good, just as he did with Joseph in Egypt. Because Joseph was able to interpret Pharaoh’s dreams, Pharaoh made him lord and ruler over his house. Joseph, formerly a shepherd boy, was now one of the most important men in Egypt.

St. Joseph had to go through many sufferings as well. Mary was well along in her pregnancy when, as members of the House of David, they had to journey to Bethlehem to take part in the census ordered by the Roman rulers. That involved a difficult journey of perhaps 85 miles on a donkey with no advance lodging reservations. But Joseph obeyed the law. He went and could find no lodging since Bethlehem was packed with other visitors who came for the same purpose. He kept knocking at the doors, but found no room. Think what was going through Joseph’s mind. He was the husband, the provider, and knew that Mary’s child was of divine origin. Finally, they found a cave in the countryside where the shepherds tended their sheep, and Jesus was bom in a place where animals were sheltered. The King of heaven and earth was laid in a manger – a trough where the animals ate. Think of the suffering, the difficult time that Joseph went through. But, looking at it, good came from even that trying experience. For example, the prophecy that the Messiah was to be bom in Bethlehem was fulfilled. It was not the prophecy that the Messiah was to be born in Nazareth. Additionally, the Holy Family had more privacy in the cave than they would have had in the crowded inn. A secondary benefit is that now we can sing songs like “Away in a Manger” rather than “Away in a Marriott.”

The fourth similarity between Joseph and St. Joseph is that both left their homes and went to Egypt. Joseph was sold into slavery and taken to Egypt. St. Joseph fled to Egypt with his family to escape Herod’s wrath.

The ability to understand dreams is their fifth similarity. In the Old Testament, Joseph gained fame for this ability. While still in prison, he was able to interpret the dreams of the baker and the cupbearer of Pharaoh. When Pharaoh had a strange dream of 7 fat cows being devoured by 7 skinny cows, he couldn’t understand it. Pharaoh also had the dream of the stalk, which had seven healthy ears of corn. Suddenly there was a stalk with 7 withered ears of corn, which swallowed the healthy stalk. Pharaoh couldn’t understand these dreams, so he called his magicians but they could not interpret the dreams. Pharaoh had heard of Joseph’s ability, so he sent for him and asked him to interpret these dreams. Joseph gave Pharaoh the interpretation – that God was going to bless Egypt with 7 years of plenty, but after that would come 7 years of terrible famine. Because of this insight into the future, Pharaoh picked Joseph to be the manager of his house and ruler over all his possessions.

St. Joseph also understood the meaning of his dreams. The New Testament relates four dreams, which St. Joseph understood and unhesitatingly acted upon. The first was when he had doubts about whether to take Mary as his wife. The angel said “Fear not, Joseph, to accept Mary as your wife. It is by the Holy Spirit that she has conceived this Child.” Joseph recognized the guidance in the dream as coming from God and followed the angel’s bidding. Likewise, he recognized the urgency of the message conveyed in the second dream – “flee into Egypt. Herod is trying to kill the Child.” In the third dream,

Joseph understood that it was safe to return to Palestine since Herod was dead. Lastly, in the fourth dream, Joseph accepted the angel’s advice to return to Nazareth because Herod’s son had become king. St. Joseph’s ability to recognize the divine guidance sent to him in dreams literally saved the Holy Family on several occasions.

The sixth parallel is that of being the ruler of the king’s house and possessions. Pharaoh, the king of Egypt, made Joseph ruler and lord over all his possessions in Egypt. St. Joseph, as head of the Holy Family, was ruler over the King of the Universe’s home in Nazareth. Jesus, the King of Kings, the Lord of Lords, the Alpha and the Omega, chose Joseph to be the head of the Holy Family, to be the lord, master and ruler over the house.

The seventh similarity between the Joseph of the Old and Joseph of the New Testament is their purity and chastity. Remember what happened to Joseph. Joseph was a very strong man, a very handsome man, and Potiphar’s wife fell in love with him and tried to seduce him. Day after day she would ask him and try to lead him into having an adulterous affair, but Joseph steadfastly refused. Eventually, she lied and told Potiphar, “Look what this Hebrew tried to do to me.” Potiphar put Joseph into prison, where he stayed for two years. In the New Testament, St. Joseph is the virginal husband of Mary.

St. Joseph, the most pure and chaste man that God ever created, married the Blessed Mother. They lived a virginal life their entire marriage. The beautiful virtues of purity and chastity are thus exemplified in both Joseph of the Old and St. Joseph of the New.

The eighth parallel is that they both experienced poverty. Joseph of the Old Testament had everything material taken from him – his brothers stole his inheritance, he was sold into slavery and owned nothing, and he was unjustly imprisoned for a few years. St. Joseph knew poverty as well. We are told in the gospels that he was a carpenter, a member of the working class. When he uprooted his family and went to Bethlehem and then to Egypt, he probably took his tools with him so he could continue earning a living, but that is about all he had in terms of material goods. We also know that the Holy Family was poor because at the Presentation they gave two turtle doves, the offering of the poor.

Both Josephs were responsible for feeding the entire world, which is their ninth similarity. Because of Joseph’s advice, Egypt was the only country in the world that had grain during the famine. The other nations came to Egypt to buy their grain. Thanks to Joseph, the peoples of the world had food, and Pharaoh became even richer and more powerful. How does that relate to St. Joseph? St. Joseph was the nurturer and the one who fed Jesus. He practiced his trade and earned the money to buy the food, which fed Jesus. St. Joseph, as head of the Holy Family, taught Jesus a trade and provided his initial religious instruction. He helped Jesus grow to manhood and become for us the Eucharist, feeding us with his own Body, Blood, Soul, and Divinity. Thus, indirectly Joseph has fed the entire world with the Bread of Life.

Lastly, we can go to both Josephs in times of need. The people of Egypt and the other nations went to Joseph for the grain they needed during the great famine. During this time of suffering there was a saying, “Go to Joseph for what you need.” Because Joseph had such tremendous influence with the Pharaoh, many peoples’ petitions were answered. We priests, religious and lay people can go to St. Joseph in our time of need. Whatever difficulties and sufferings we have, we go to Joseph because he has great influence with his Son, the King of the Universe. Jesus, good Son that he is, still follows the precepts of the Fourth Commandment and, so long as it is in accord with the will of the Father, does as his mother and foster father ask.

These, then, are ten similarities between Joseph of the Old Testament and St. Joseph, two of the greatest figures in the Bible. Let us now recognize how they have experienced many of the same trials and sorrows we face, and let us follow their example of steadfast love and service of God. They stand ready and able to help us, if we but “go to Joseph.”